A Dhuliya Malhar / Raga Dhulia Malhar / Dhuria Malhar ( the Komal Gandhar version ) that is sombre, and subtle. Both Gandhars are used in some gharanas and some drop the Gandhar altogether.

Ruchira Panda, a renowned and leading vocalist of Kotali Gharana sings Raga Dhulia Malhar, a spectacular rendition of the rain-bringing Raag with an original Kotali Composition of Pandit Manas Chakraborty.

She has expertise in Thumri, Khayal, Tap-Khayal, Tappa, Nirguni Bhajan and is also an exponent of other semi-classical forms including Kajri, Patjhar, Birha, Jhoola, Pasar ke Geet, Jaad kr Geet Chaiti etc. She is both a solo vocalist and composer and is known to perform in all the major Indian Classical music festivals in India, Canada, USA and Europe. Besides being an “A” grade artist of All India Radio and Fellow of Ministry of Culture, Govt. Of India, Ruchira Panda is also an Established Empaneled Artist of Indian Council for Cultural Relations (ICCR), SPIC MACAY.

“Sangeet Piyasi” – the passion that the name reflects, also goes behind the idea of creating it. Built on the ideals of Tabla maestro Guru Krishna Kumar Ganguly (Natu Babu) of Benaras and Lucknow Gharana, “Sangeet Piyasi” is an organisation formed by the disciples of Natu Babu.

It has established itself as a prominent name in the field of Hindustani Classical music and has relentlessly worked since 1992 for the cause of the same. Sangeet Piyasi is known for organising musical concerts, seminars, workshops and regular training programmes throughout the year.

Among its other works, Sangeet Piyasi arranges for scholarships for needy but deserving students and also financially aids, musicians and artists of past years whenever possible. With their base in Kolkata, the organisation has spread its horizon in other parts of India was well wilth the help of the members.

Ruchira Panda is the winner of two categories in the Talent Search Contest organised by Dover Lane Music Conference/Academy in the year 1998-99. She also received the Ustad Amir Khan Award for the best vocalist and Rotu Sen Memorial Award for Thumri. Panda was awarded the HMV award for the best young talent of the year 1998-99 and also the Sangeet Kalaratna Award from Matri Udbodhan Ashram, Patna.

In the year 1998-99, the Department of Culture, Ministry of Human Resource Development, Government of India, awarded her a scholarship in the field of Hindustani Music. She received the junior fellowship from the Ministry of Culture of the Government of India for the year 2008-2009, in the field of Hindustani Music. “Jadubhatta Award” (2009-2010) and “Sangeet Samman” (2011-2012) from Lake Cultural association which added two more feathers on her hat. 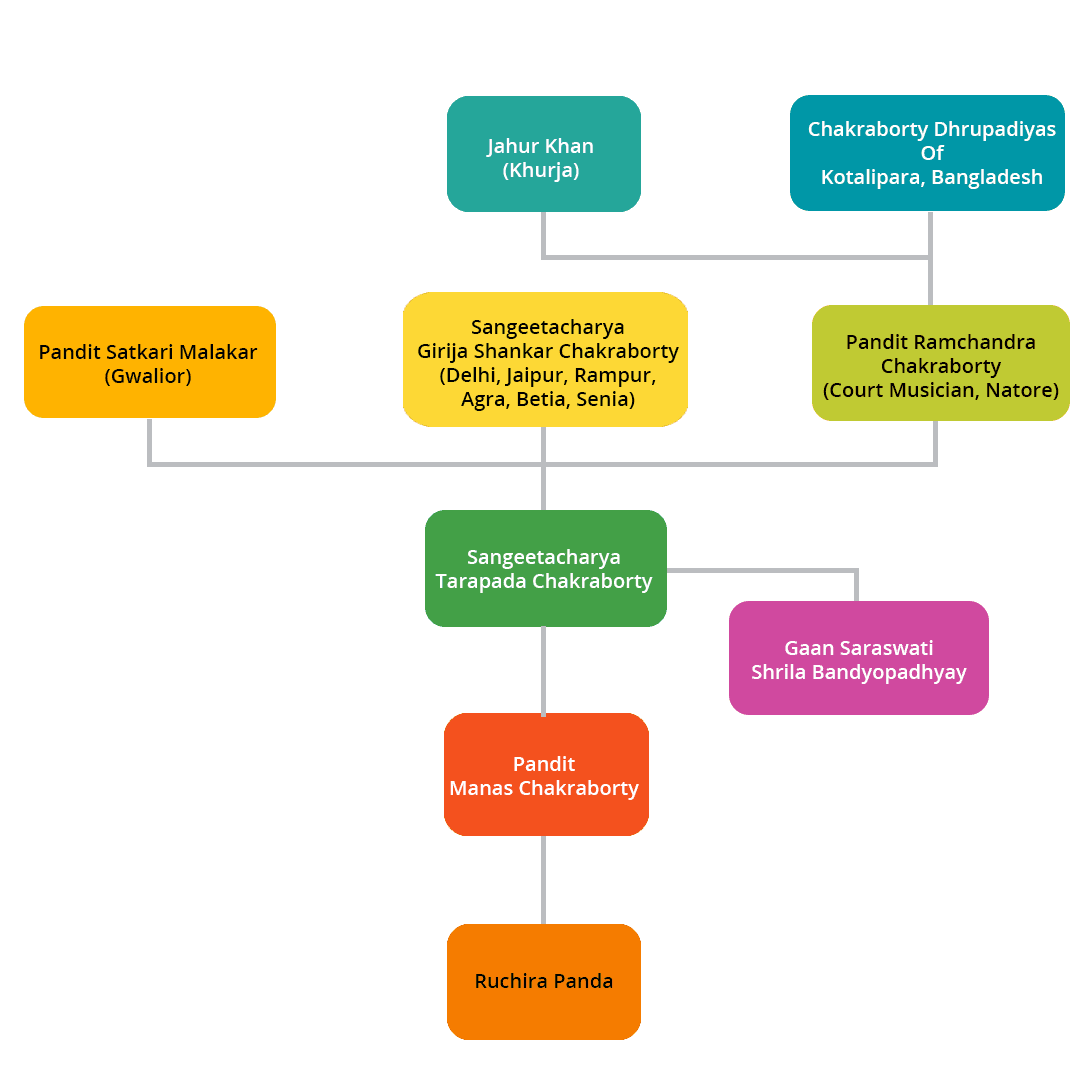